I want to go in a different direction and deal with something that bothered me (I don’t know if it bothered anyone else, but this is my class). We talked about Saul and the בעלת אוב, and before about Michal marrying Paltiel and then remarrying David, and David eating the לחם הפנים, and similar cases when the characters in תנ״ך acted in ways that were apparently against the halacha. We brought the explanations of the Rishonim and Acharonim, explaining the details of halacha that justified their actions. This feels funny to me. It seems anachronistic. Do we really think Saul had a copy of the Shulchan Aruch on his desk?

We could answer simply that it’s all the same Torah, that back then they kept the halacha just as we have it today. Understanding the psak halacha tells us what the characters in תנ״ך believed. I would like to take a more sophisticated look at this, one that alleviates my inner anachronism alarm.

We certainly believe they had the Torah in the days of ספר שמואל. They had both the written Torah and the “oral” Torah, the תורה שבעל פה, just as we do today. It’s important to realize that the term תורה שבעל פה has two different meanings.

What do we mean by תורה שבעל פה?

It is the idea that there is an ideal Torah, the sum of all of ה׳‘s will. It is the ideal state of halacha, with no human interpretation or error. This was given to משה‎ (רש״י שמות לא:יח)‎ נמסרה לו תורה במתנה ככלה לחתן, שלא היה יכול ללמוד כולה בזמן מועט כזה. To make this more mathematical, I’m going to intorduce some Venn diagrams. תורה מסיני is the set of all statements that represent ה׳’s will, in a universe of all possible statements: 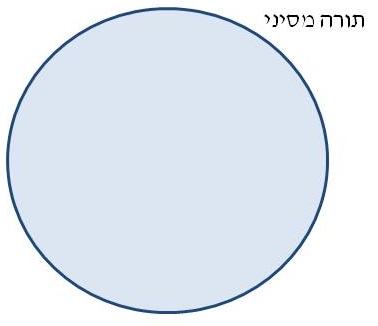 Rabbi Joel Finkelstein called me a Platonist when I talked about this model, of an ideal heavenly תורה שבעל פה. I don’t really think in Platonic terms about the physical universe, but it’s a useful way to think about the transmission of this תורה שבעל פה, since we human beings are fallible and imperfect:

But even if some of this Torah is lost, we have ways of recovering it:

Zadok HaKohen makes this human side of תורה שבעל פה an important part of his theology:

So there are two definitions of תורה שבעל פה, one the ideal received by Moshe, and one the halacha (call it the “Shulchan Aruch”) by which we live our lives. We work under the assumption that they overlap almost completely (i.e. that our behavior corresponds to ה׳'s will) but we have to acknowlege that we may be wrong, that there may be things that we do that we think are right but really should be corrected: 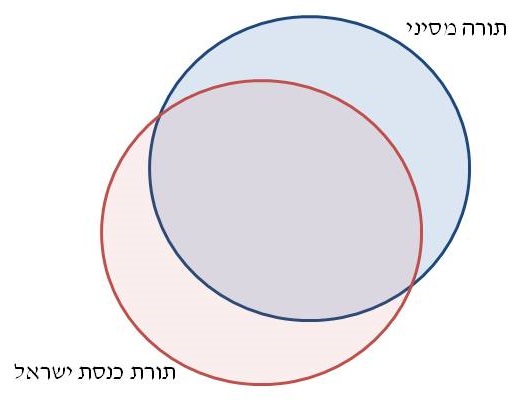 Rav Lichtenstein points out that this model is incomplete: 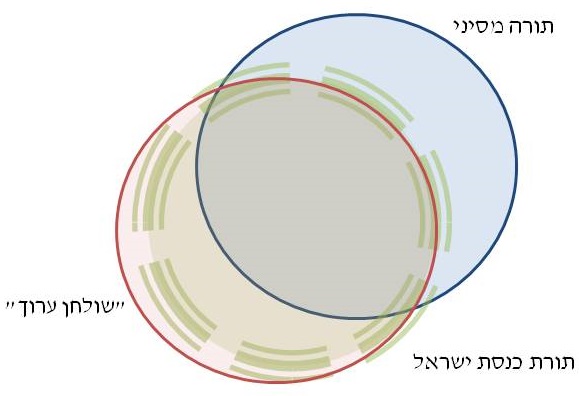 In reality, our תורה שבעל פה has fuzzy borders and gaps, but for the purpose of this model, we’ll assume there is one, determined halacha (back to figure 2). However, since it is determined by human beings with incomplete memories and imperfect logic, it may change with time. We may reach an understanding that is different from our ancestors.

What does that mean for תנ״ך? The people of the time were people. They behaved according to some rules (this seems incontrovertible); when they were doing the right thing (as indicated by the text), there was some definition of “the right thing”, and when they were wrong, there were some laws or ethical tenets that they were violating. When we read any work of literature, we try to understand the motivation of the characters, but תנ״ך gives us very little of their inner lives. How can we understand the assumptions that underlie their behavior?

From a secular perspective, we could assume that they were the same as us, with our same values, but we would call that projecting and reject such an interpretation. We could look at the archeological evidence and assume the people of ancient Israel shared the values and mores of their neighbors, but we know that’s not true; they dedicated their lives to eliminating the influence of their neighbors. I have a much more powerful tool: I can assume that the rules and tenets that guided their lives were their תורה שבעל פה, which was their best estimation of the heavenly תורה שבעל פה: 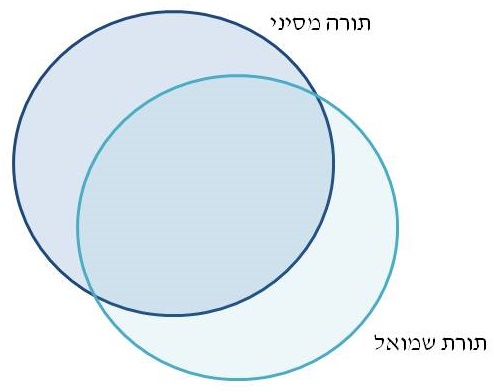 Now the key assumption is that both they and we are working from the same ideal: 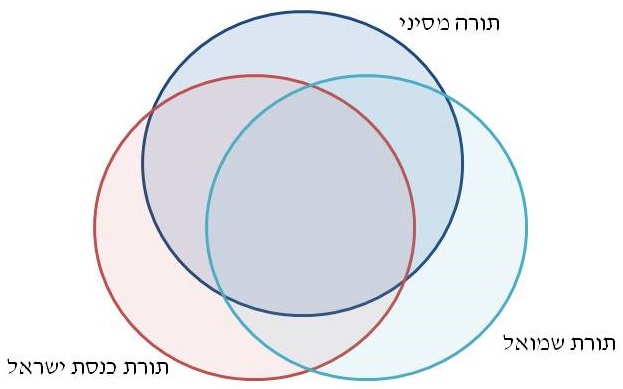 In studying תנ״ך, we have no way of knowing the will of ה׳. And we also have no way of knowing the standards of the time (their “Shulchan Aruch”). But we do know the Shulchan Aruch that we have. And that is the best available estimate of תורה מסיני, just as תורת כנסת ישראל בזמן שמואל was their best estimate. So I want to know the halacha in a given situation, not to know how I should behave (that’s a subject for a halacha shiur) but as my best estimate for the standards that they were striving for: 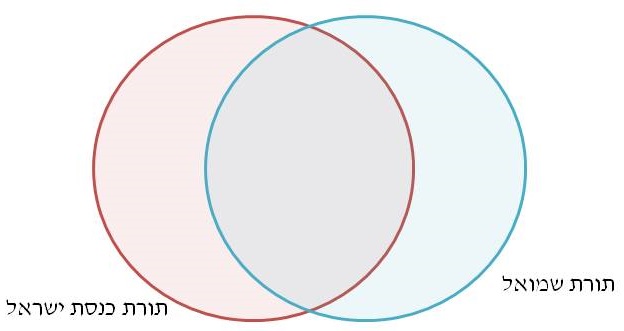 And that will be the role of modern halacha in understanding תנ״ך.

Now there’s one major difference between us (the left-hand set) and the time of שמואל (the right-hand set): שמואל was a נביא. He had a direct line from G-d, a knowlege of absolute Truth.

Does that affect how we see the role of halacha then? Did they have a better, more “accurate” handle on תורה שבעל פה? It’s not so simple:

What does חכם עדיף מנביא mean? There are many explanations, but an important part is that a נביא in fact does not know the תורה שבעל פה simply by being a נביא. This is the concept of לא בשמים היא:

So a נביא cannot tell you the halacha. Note something interesting: we say אין הנביא רשאי לחדש דבר but the “חידוש” that we are talking about is only recalling the תורה שבעל פה that had already been given but had been forgotten. There is only one legitimate way to restore תורה שבעל פה, and that is by human logic:

So what does a נביא do? Let’s take a step back to חכם עדיף מנביא:

This always bothered me. How can the Torah tell me that I need to believe something that I unequivocally know to be false? Are we really supposed to suppress our own intellects? The Ramban explains that the opposite is true:

The halacha אומר לך על ימין שהוא שמאל is procedure, not epistemology. When I listen to a חכם I am not saying that I am wrong; I am entitled to my understanding of the Torah as we quoted Rav Lichtenstein above. I am, however, acknowledging that the חכם's view is legitimate as well. In the ideal state, there is a process for deciding the הלכה למעשה, and we do not want that תעשה התורה כמה תורות. Something has to be decided. But אלו ואלו דברי אלוקים חיים.

This is not the case with a נביא. To speak in the name of G-d is to be infallible; there is no room for other views. If we disagree with a נביא, we are declaring him a נביא שקר. More than not listening to him, he is liable for capital punishment.

In תנ״ך we see very little of what we would call פסק הלכה. Reb Zadok explains that it is specifically because נבואה was so prevalent that we have so little record of it:

A נביא has the power of הוראת שעה, of issuing a ruling that is opposed to the “explicit” Torah. He can do this because he represents the word of ה׳ directly and unambiguously. But is limited:

Anyone who needed a פסק, went to the local נביא. And that נביא decided the halacha, not on the basis of השגה דרך חכמה, since that was נחשב…לכלום, as השגות של מחשכים, as השגה מסופקת; but on the basis of רוח ה׳. But that was by definition הוראת שעה and you couldn’t learn from it:

So in our model, תורה שבעל פה in a time of נבואה is in two parts. The smaller part (נחשב…לכלום) was השגה דרך חכמה, just like the entirety of our תורה שבעל פה. The bulk was הנגה על פי נבואה, which was perfect (all inside the תורה מסיני circle) but only individual points. There are no principles, no ways to generalize from a הוראת שעה. 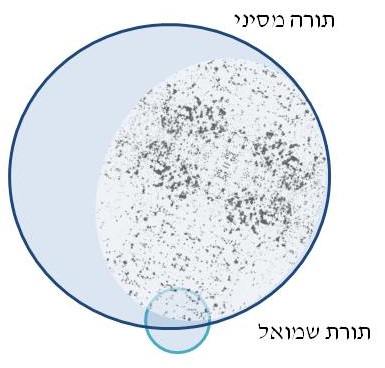 How does this affect our model in learning תנ״ך? If we see a character behaving in a way that goes against halacha, there are four possibilities:

Our model is now: 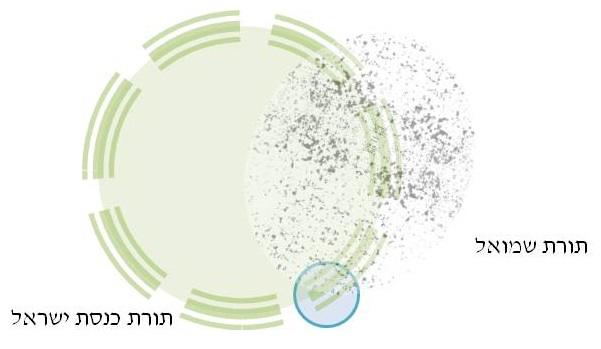 But the only incidents that are written down are the ones in the little blue circle; where they are acting על פי חכם, not על פי נביא.

But there’s a problem with my model of הוראת שעה: there are examples of it recorded in תנ״ך:

The problem is that במות, private altars, are forbidden when there is a central משכן or בית מקדש. So this is a classic הוראת שעה:‎ אליהו's מזבח is forbidden, but he is a נביא and can tell the people that now, at this time only, they are to build it. Similarly גדעון and מנוח are told to offer sacrifices in their own homes.

But the common theme of all these הוראות שעה in תנ״ך is that they are all about the centralization of the עבודה, and that has its own halacha:

So this whole category of halacha, the המקום אשר יבחר ה׳, is different. It requires the involvement of the נביא, and the violations of that rule are less an example of הוראת שעה per se, but an explicit exception in the איסור of במות. The halacha of הוראת שעה doesn’t need examples in תנ״ך; it comes explicitly from the Torah: אליו תשמעון. But it is a הבואה שלא הוצרכה לדורות, one that cannot be used to understand and extend תורה שבעל פה, so it will not be recorded. A הוראת שעה within the laws of המקום אשר יבחר ה׳, however, is הוצרכה לדורות; it is part and parcel of the תורה שבעל פה.

We see these played out most explicitly when David wants to build the בית מקדש:

What is going on here? We will deal with the reason that ה׳ does not let David build the בית מקדש when we get to this chapter, but Rabbi Leibtag points out something interesting. David first goes to נתן to ask a פסק as a חכם: he is “darshening out the pasuk”. The Torah says הניח לכם מכל איביכם מסביב, and David sees his situation as ה׳ הניח לו מסביב מכל איביו, so it’s obviously time (David of course did not read the words of the תנ״ך; the author here is pointing out what the situation was). And נתן, wearing his “Rabbi” hat, agrees: it it time to build the בית מקדש. Then comes the נבואה, and the הוראת שעה: no, David cannot. And this outweighs the פסק. But there’s no reason, no way to generalize a rule about when הניח מסביב applies.

So this is my approach to understanding the halacha in תנ״ך: if the characters are portrayed in a positive light, I assume they are acting consistently with the halacha as we understand it today. If a נביא acting as a נביא gives an instruction related to the בית מקדש (including issues of מלכות) it is a הוראת שעה and cannot be related to a halachic decision. And then we wait for Eliyahu Hanavi, תשבי יתרץ קושיות ובעיות.