David now turns from his mourning to action:

It is striking that despite the fact that David has already determined to expand his sphere of influence beyond Ziklag (ויאמר ללמד בני יהודה קשת ), he consults with the Urim V’Tumim first:

And the site of David’s new capital is Hebron, which is significant in many ways. It is the ancient home of the patriarchs, giving it religious importance, and it is the population center of Judah (the people lived mostly in the mountains; David has previously been confined mostly to the southern wilderness). It is also the northernmost city under David’s influence:

So it is an ideal place to start to expand that influence. This works; the people of Judah respond by formally crowning him king.

David next makes a bold political move, looking to ally with the group closest to Saul. The people of יביש גלעד had been personally saved by Saul, and they were the only ones who would risk their lives to recover his body.

He promises that they will be repaid, both by ה׳ and by his royal favor (“just happening” to mention that here) with a well-known hendiadys:

And he hints that they need him:

However, David’s overture fails, as we will see:

The Malbim sees a hint to the politicking in the wording here:

And it is important to note that the new capital of Israel is in מחנים; Ishboshet had to be smuggled out (ויעברהו) to safety on the east bank of the Jordan. While Ishboshet is nominally king over “ישראל כלה”, the Philistines control the bulk of the country.

Before we look at who Ishboshet is, I would note that there was religious justification for continuing the royal line of Saul:

Now, who was Ishboshet? He doesn’t appear in the original list of Saul’s family:

And the only other children of Saul we know about were from his concubine (and they lived long after Ishoboshet’s death):

We will see Saul’s concubine (explicitly called that) רצפה בת איה later. But איש בשת is no where to be seen.

We have to look at the genealogy in דברי הימים:

Now here, Saul’s grandfather is called נר, while in שמואל א he is named אביאל.‎ נר is Saul’s uncle.

So what happened to Ishboshet? We do have an Ishbaal in דברי הימים, and Radak (and most other commentators) connect them:

It’s interesting that names with בעל throughout תנ״ך turn into בשת in שמואל ב:

Rashi presumes that the change is intentional; בשת means “shame”; specifically the shame of idolatry:

So evidently in times when Baal-worship was not a problem, the names with בעל were common (it was the name of Saul’s great-uncle). It just means “master”. אשבעל maybe means “he-man”; wishful thinking for a son who never went to battle and was easily manipulated when he came to power.

This past summer (2015), Israeli archeologists found a jar with the name אשבעל, from about the time of David. 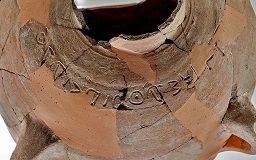 The text points out that David ruled for 7.5 years, while Ishboshet only ruled for 2 years. How do we understand the chronology?

Many commentators (including the מצודת and דעת מקרא) say that איש בשת gradually extended his reign, and the שתים שנים refers only to על ישראל כלה:

The Ralbag understands the two years not as the length of his reign, but as the time until the next story happened (similar to his interpretation of Saul’s (שמואל א יג:א)‎ בן שנה שאול במלכו; ושתי שנים מלך על ישראל):

But I find that unconvincing, and the idea that a weakling like Ishboshet was increasing his power is also unlikely. I prefer Tosphot’s understanding, based on the Gemara:

We will soon get to the tragic end of Ishboshet’s kingdom. But first we have to learn about its tragic beginning…