We discussed the אורים ותומים last time, but one thing the gemara (יומא עג,א) learns from here is that one can only ask one question at a time.

David obviously suspected that he would be betrayed in קעילה, since he felt the need to ask the question; we don’t know what hinted at that. The Abarbanel asks how the אורים ותומים could have answered in the affirmative, ירד and יסגירו,when that actually did not happen (David escaped before those predictions could come true). He answers with the Targum, הסבירין לממסרי יתבי קעילה בידיה; הסביר למחת שאול: the question was about their intentions, not a prediction about the future. The כלי יקר answers simply that the question was hypothetical: If I remain here, will Saul attack and will the people of Keilah betray me?

The כלי יקר adds that David asked with the phrase ה׳ אלקי ישראל as a prayer: ה׳ is the G-d of all ישראל. Do not let Saul’s people kill mine, and do not require me to kill them.

There is a chapter of תהילים‎ that deals with David’s response to betrayal. It does not have a specific history associated with it, but we know of two such incidents: one now, when David is running from Saul (the most dramatic betrayal here is actually a bit later in the chapter); and the other when he is running from Absalom his son who has taken over the kingdom. Seforno associates this perek with the rebellion of Absalom, but we will go with Radak who associates it with our story.

The perek divides into three stanzas. The first, from א to י, is a standard sort of פרק תהילים‎. It starts with a prayer for help and concludes with a promise of a prayer of praise. Note the use of the term סגר לקראת רדפי which parallels היסגרני בעלי קעילה בידו in שמואל. The other striking thing about this section is how it seems to become less intense as it goes on. It starts with ה׳ directly attacking, with a very anthropomorphic vision of G-d holding spear and shield. Then it is addressed to מלאך ה׳, then becomes passive: ורשתו אשר טמן תלכדו (the term שואה is far more powerful in modern Hebrew, with its association with the Holocaust; in תנ״ך the commentators generally translate it as “darkness”).

I think this is David talking to himself and to us, his audience. This is a technique of de-escalation (I was taught it as a way of dealing with difficult patients) where you match the other person’s level of intensity, even if it means yelling as well, and then gradually bringing your on level down, which helps bring the other person down as well. As we said , David doesn’t really want destroy his enemies but he has to convince himself of that.

The praise that David offers comes from both body and soul, since both need to be saved. The phrase כל עצמותי תאמרנה is bought as the source for shuckling during davening, as a way of bringing our bodies into our prayer.

The second stanza gives the backstory: what happened that David felt it necessary to pray. He starts by accusing the עדי חמס, literally “witnesses of violence” but it is a technical term for false witnesses, עדים זוממים:

And David describes how he suffered to help those who would eventually turn on him.

My One and Only

Here he asks that his נפש and his יחידה be saved. יחידה is an unusual word in this context; it is a synonym for נשמה that appears twice in תנ״ך, both in תהילים‎. The midrash lists the names of the “soul”:

In the context of the midrash, these are all synonyms but the kabbalists saw this as a hierarchy of aspects of what we call as a whole, נשמה. Unfortunately the terms are used inconsistently in different sources, and the same terms are used for different things. Like a “day” (as in “day and night”) being half of a “day” (24 hours). I don’t know that David had such a precise and detailed system in mind, but these distinctions can be useful. 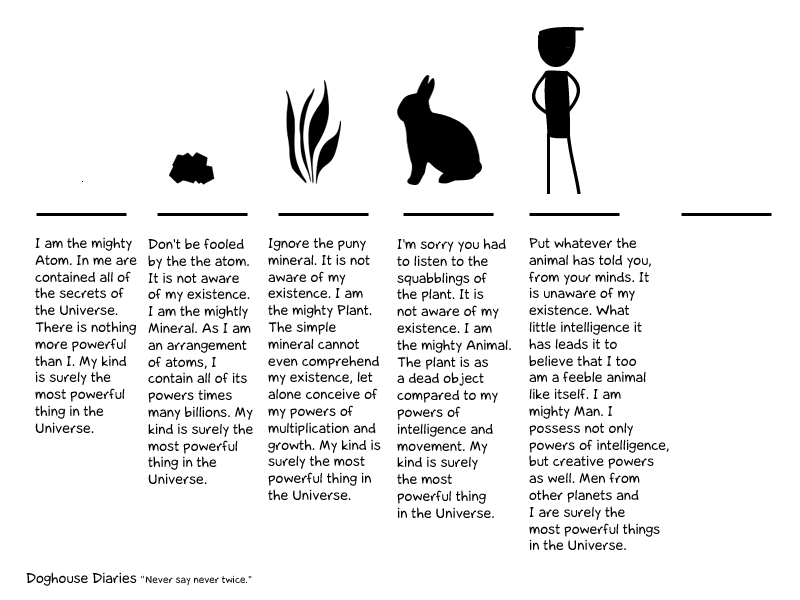 My understanding (based on the נפש החיים and Rabbi Jeremy Kagan’s The Jewish Self) is that the נשמה in the three-level model is composed of 3 levels itself in the five-level model. We see them as one because they are all present in human beings and we don’t have any other species to compare to that might have one but not the other. The נשמה is intelligence, the ability for our nervous system to contain a model of the world that allows us to predict the outcomes of our possible responses and solve problems. חיה, the next level, is sentience, self-awareness, when our internal model is sophisticated enough to include a model of itself. There is a perennial question in computer science whether it is possible to have one without the other: could a computer be truly intelligent without being self -aware (see, for instance, Douglas Hofstadter and Daniel Dennett’s The Mind’s I)?

The יחידה is a higher level of abstraction, when our internal model of the world includes the infinte Divine. As Rabbi Dessler puts it:

And it ends with a summary of what was said before, that ה׳ embarrass (in the sense of יבשו—having their prayers go unanswered) but ends on a happy note: there are those who still support me, חפצי צדקי. May they be happy and I will sing your praises forever.