Last time, we discussed the idea that שירה, the song of the Levites in the Temple, was commanded in the Torah from the verse,

and the Gemara says (ערכין יא,א)‎ איזהו שירות שבשם? הוי אומר זה שירה. Phyllis Shapiro noted that שֵׁרוּת, service, and שִׁירָה, song,look like they ought to have some liguistic connection. But I can’t find anything. The gemara there is willing to say אל תיקרי יָסֹר אלא יָשִׁיר to learn the laws of שירה, but nothing about שֵׁרוּת.

Even Hirsch, who has a whole system of etymological derivations, has nothing. In the Etymological Biblical Dictionary of Hebrew, based on Rav Hirsch’s writings, associates שרת, serve, with שרד, separate, and שרט, cut. שיר, sing, is associated with many roots like סיר, contain, ציר, connect, ישר, strengthen, and שרר, concentrate. But they are not connected to each other. 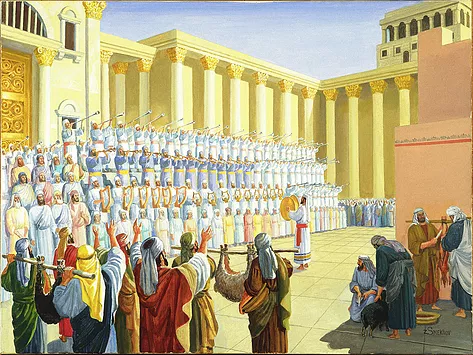 So if שירה is a מצוה דאוריתא, then what was David’s innovation? We know he set up a system and a schedule for the שירה, and wrote the words (and possibly the music) for much of what was later used in the בית המקדש, but the biggest innovation seems to be the instrumental accompaniment. There’s an argument in the Mishna about who played the instruments:

And the Gemara tries to connect this to the question of whether the מצוה of שירה was the vocal song, or the instrumentation:

The conclusion is that it is the vocals that are the essence of the מצוה, and we would conclude from our reading of תנ״ך that in fact David introduced the instruments.

However, playing instruments should not be a problem even if there is no מצוה, since the whole concept of שבות, the rabbinic prohibitions that “surround” the laws of Shabbat, don’t apply in the מקדש:

Tosaphot explains that the argument is about tuning or repairing the instruments:

The Ritva says that תיקון כלי is so automatic for a musician that the גזירה against playing applied even in the מקדש:

And the question of repair remains an argument in the gemara:

The bottom line remains that the real commandment is the vocal song. The instruments are only incidental, כלי לבסומי קלא הוא דעבידא.

In fact, the instruments are always attributed to David:

Similarly in the time of Chizkiyah:

What does adding the instrumental accompaniment do for the שירה?

It turns the שירה from an incidental part of the עבודה to the focus of the service. This changes the nature of the עבודה. When it’s just the sacrifice of a lamb, then it just involves a few כהנים. Now it is possible to have an audience, and even to have the people participate (we’ve talked about the nature of the refrain הודו לה׳ כי טוב כי לעולם חסדו). Over the next few weeks, I want to look in detail at the lyrics of the songs he writes for that עבודה.

The Vilna Gaon talked about the importance of music in our own time:

This week is תשעה באב, and I will conclude with a note about the last שירה in the בית המקדש:

The image of the Levites playing on as the Temple burns around them reminds us of a more recent disaster: