Back in the story of Avshalom, when we last saw him, he had been welcomed back to the palace but not restored to his position as crown prince.

There is an interesting halacha about this perek:

What do we learn from the story of Avshalom? One obvious thing is the consequences of the law of אשת יפת תאר and of the בן סורר ומורה; as we discussed before, Avshalom’s mother was מעכה בת תלמי מלך גשור, likely a captive princess.

And while Avshalom is not a literal halachic בן סורר ומורה (that only applies to a 13-year old), he is still the archetype of what a בן סורר ומורה is. The actual halacha never applied, but just like Avshalom, it is a source of lessons for the future:

However, ר׳ יונתן objects that the halacha did apply:

Rabbi Aryeh Klapper points out many problems with ר׳ יונתן’s comment. First, ר׳ יונתן was a כהן, and should not have been anywhere near a grave. Second, he was an second-century CE tanna, who lived a century after the Sanhedrin could judge capital cases. So he could not have seen an actual case of בן סורר ומורה being tried. Third, there is a halacha forbidding anyone from sitting on a grave. So one might say that ר׳ יונתן isn’t being literal either: 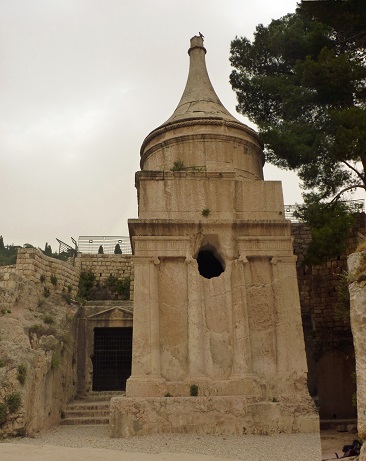 And the fact that the “Tomb of Avshalom” has no actual connection to Avshalom is irrelevant. It is a symbol of his rebellion, and a source of a lesson about how to not raise children. And that is why מעשה אבשלום נקרא ומתרגם. What was the problem with David’s relationship with Avshalom? David is clearly not denying Avshalom anything; he has מרכבה וססים וחמשים איש רצים לפניו. His brother Adoniya will later do the same thing:

It is a symbol of royalty:

However, David will not name Avshalom as his successor; he [David] knows that.

But he won’t explicitly tell his other sons that until the end of his life. Avshalom has some sort of position and power, and that is implied in the end of the last perek (שמואל ב יד:לג)‎ ויקרא אל אבשלום.

So Avshalom had power, wealth and fame. What he did not have is a relationship with his father.

And I think that is the essence of the לימודים גדולים ונשגבים of the story of Avshalom and David.

So what does Avshalom do with what power he has? He undermines his father.

There is some subtlety to Avshalom’s method here. He is appealing to those מאחד שבטי ישראל because he is playing on the historic tension between יהודה and the rest of the tribes.

And even David, who was king over the united Israel, was really the single king over two separate countries.

But Avshalom may be more subtle than that. Remember the “משפט המלך”:

Avshalom is demanding a return to the days of ספר שופטים, when the people were free, with no central government taking their money and telling them how to run their lives.

He is a classic populist demagogue. He will refuse to be a מלך. Of course, he will still be the ruler. He wants to be Lord Protector of Israel.

And then Avshalom cements his popularity by refusing the honor due a king. He is not the vain elitist (כאבשלום לא היה איש יפה בכל ישראל להלל מאד) that everyone thought; he treats everyone as an equal: