Last week we discussed the connection between נקב שם ה׳ and עין תחת עין, and proposed that both are part of ברית סיני, that even civil laws require revelation to be morally binding. Mickey Ariel mentioned that the Rambam, at least, feels that some laws can be derived by observation of the world around us. This is called the doctrine of “natural law”: that if we are careful and rational philosophers, we can deduce moral law. This is called “ethics”, the philosophical question not of what is real, but what is right. The idea comes from Greek and Roman philosophers (who didn’t believe in a just deity):

The other side is the nihilist side, that there is no inherent ethic in the universe, just our individual needs:

Within a religious perspective, the question has been put more succinctly:

And in the Jewish perspective, the question is:

Note that we assume that Halakha, broadly defined, includes all good; that is, there is no ethic outside of Halakha. The question is, are there any ethical precepts that we would be bound to obey even if they were not explicitly commanded, that is, are they independent of Halakha?

The question has been long debated, and I won’t solve it now (my own answer is based on the פחד יצחק חנוכה מאמר ז׳;‎ ואכמ״ל). There is another question, though, of what did the Rambam actually hold. See the articles by Rav Aharon Lichtenstein (who says Rambam did believe in natural law) and Professor Marvin Fox (who says he did not), cited above. The Rambam never directly addresses the issue. There is one place where it is relevant, in the laws of חסידי אומות העולם, and there the argument hinges on a single letter:

There are manuscripts that go both ways—אלא and ולא—so all we are left with is the argument.

That was from last week. Now I want to talk about this week’s parasha, and the end of the תוכחה:

This is an insight from Avigdor Bonchek, What’s Bothering Rashi: Vayikra. What does זאת mean in that last pasuk? “Despite this, I have not been revolted by them”. Despite what?

Rashi explains זאת as “Despite all these punishments”. Now, that’s not how I would have explained it. The parallel to לא מאסתים ולא געלתים…להפר בריתי אתם seems to be in the description of our behavior:

In other words, זאת refers to our rejection of G-d, and ואף גם זאת means, “despite Israel’s despising Me, I will not despise them”. But that’s not how the word זאת is used in the rest of the תוכחה:

אף אני אעשה זאת can’t mean “I will reject them” since ה׳ says explicitly that He will not reject them. So Rashi explains ואף גם זאת…לא מאסתים ולא געלתים לכלתם להפר בריתי אתם as “despite my punishing them and despising them, it was not to the extent of destroying them or breaking the ברית”.

The Meshech Chochma is then bothered by the wording of לכלתם להפר בריתי אתם, which seems to mean “in order to destroy them or break the ברית”, then says that this is exactly what the pasuk means: “I despised them not in order to destroy them but because אני ה׳ אלקיהם”. The punishments of the תוכחה, the זאת of our pasuk, are for our benefit. When the Jews feel at peace in the גלות,‎ ה׳ makes sure we cannot assimilate:

He famously made the prediction that even Germany, the epitome of culture and learning (he’s writing in the 1870’s), would not be safe for the Jews:

That idea is pretty commonplace now. But the interesting point is that he says the problem is not the economic comfort of גלות, but the intellectual complacency: 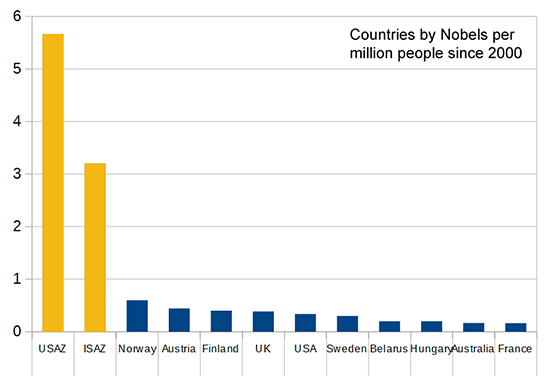 But the Meshech Chochma says that’s a side effect of our true purpose, which is to learn Torah. We are driven to produce חידושים in Torah, but there’s no real Torah in גלות. That’s the real punishment of the תוכחה: we lose out connection to ה׳, and can’t learn anymore. So we branch out into other intellectual fields, and dominate them, and think ברלין היא ירושלים. Then ה׳ uproots us and in the chaos of yet another exile we forget even the Torah we knew, and have to rebuild Torah institutions in our new home, and that serves to satisfy our intellectual needs until אחרית הימים when we can produce real חידושים again:

This is a very Zionist idea, that Torah can only truly be learned in ארץ ישראל:

And I will conclude with the words of Rav Kook: