I want to talk about the haftorah this week, from זכריה. But first we have to look at some history:

The return to Israel was led by זרבבל בן שאלתיאל and ישוע בן יוצדק. Who were they? זרבבל was the great-grandson of יכניה, the king of Judah who was taken hostage to Babylonia 11 years before the חורבן:

And ישוע was the son of the last כהן גדול in the בית המקדש:

Building the בית המקדש started under Cyrus, but politics happened and the rebuilding stopped. See the first 5 chapters of Ezra and the book of Esther for the details. The Jews got permission to start again 17 years later, in the second year of Darius. They were urged to build by חגי and זכריה:

חגי starts on the 24th of Elul:

But nothing happens. So he tries again on the 21st of Tishrei:

But still nothing happens (there’s a famine going on, and lots of politics). So he tries again on the 24th of Kislev:

This time they start working (note the significance of the 25th of Kislev), and the בית המקדש is completed in year 6 of Darius, on the 3rd of Adar:

Note what חגי is saying: not only will the בית המקדש be completed, but it will be greater than the first, and זרבבל will not be just פחת יהודה but will be king. He will be what we call מלך המשיח.

זכריה has a brief prophecy in Av of year 2 of Darius, but his major message is on the 24th of Shevat of that year (after work had started):

We picked this haftorah because it’s the most comprehensible, and it has the symbolism of the menorah like our parasha. It has three parts: ה׳ will dwell amidst the Jews again:

יהושע הכהן הגדול will be a real כהן גדול even if he is not perfect (we know, for example, that his children intermarried):

and, as חגי said, זרבבל will the true king of Israel:

It’s very inspiring. But then then זרבבל disappears. ספר עזרא changes to deal with Ezra’s arrival in Judah a generation later (it’s unclear exactly how much later), but things have fallen apart. נחמיה is the new governor; יהושע is just a footnote. There will be no leaders of Israel from the family of דוד המלך until הלל הזקן,‎ 3 centuries later.

And the nature of the prophecies changes. חגי disappears, and זכריה changes to criticism:

It’s different enough that the academics call chapters 9-14 “Deutero-Zechariah”. We don’t have to attribute it to a different author to note that his themes changed.

And now זכריה has visons of אחרית הימים; the eschaton in the distant future. The End Times are no longer around the corner. Now זכריה's visions are of ביום ההוא, a phrase that only appears in the second half. מלאכי is a נביא at this time as well, and has a similar message of criticism, visions of destruction and ultimate redemption:

We tend to lump the last נביאים ‎ חגי,‎ זכריה and מלאכי together, but they are very different from one another.

What happened? We don’t know. Something happened that turned the religious fervor and optimism of the early years of שובת ציון into a lost generation that was barely holding on when נחמיה arrived.

This sort of thing has happened before. In our parasha we have the two psukim:

And I might propose that we are seeing the same thing in our time. It has been 50 years since the miraculous (I use that word deliberately) reunification of Jerusalem. But since then, what? How are we to think about the world we live in now, not the world that might have been 50 years ago?

I won’t make comments about contemporary politics. But how did the people of זכריה's time react? 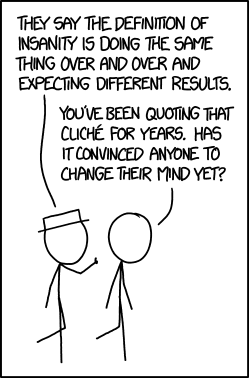 The Vilna Gaon’s comment משהרגו את היצר הרע בטלה הנבואה is terse and left unexplained, but is generally understood to mean that the urge to idol worship was tied to a level of spiritual understanding that also made prophecy possible. לא איהו בעינן, ולא אגריה בעינן means they would give up prophecy to remove the possibility of idolatry.